We admire and seek to defend the distinctive and irreplaceable architecture that speaks of Birmingham's history in the second half of the Twentieth Century.
We have been provoked into action by the loss of a number of fine buildings of the 1970s- The Post and Mail, the Central Library, and the NatWest Tower.
We believe that that the public have been influenced by the use of phrases such as "1960s concrete monstrosity" and we aim to inform and enable the people of Birmingham to appreciate the best of 20th century design and architecture.
We accept that the Council wants to improve the economic fortune of the City; however this has resulted in indiscriminate demolition. We believe the time has come to stem the time of indiscriminate demolition of any building of this period and to look afresh at the best of what remains.
We aim to rescue the terms 'Modernist' and 'Brutalism' from those who would use them to write off Modernist buildings. We view Modernism as an ethical approach to design in which the form of the building strictly follows its function.
We believe that the best buildings of the period are honest, strong and full of character.
From our unique position we can provide an independent voice and become an information repository for this period of Birmingham's architectural history.
(Alan Clawley & Mary Keating March 2018)

The end of an era

House of Fraser seems to have found itself in many rather interesting buildings throughout the country. Take Beatties in Wolverhampton as an example...

A fabulous modernist construction that was once Rackhams in Birmingham, (I remember my then boyfriend's mother telling me how much she loved shopping there) it is to close by the spring 2019.

What will happen to it? Can it be reused, will it be saved or knocked down to be reborn as a dull glass clad office/retail experience?

What should we do with our high streets, and the buildings that inhabit them, and how can we preserve the best of 20th century architecture for the future?

Do tell us what you think! 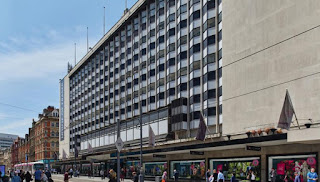 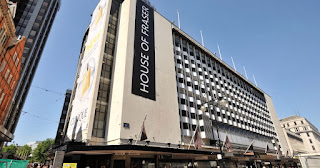 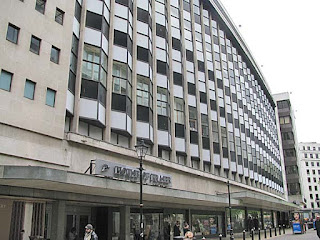 Frederick Gibberd in the news....
Do let us know what you think about his architecture. Not just this, but other work by him.

Corporation Square
This iconic architecture is at risk. Frederick Gibberd’s only piece of architecture left in the city where he trained.
Andy Foster in 'Birmingham' describes it as:
'a cool Portland stone podium with carefully placed slit windows over a recessed ground floor. Plant rooms treated as rectangular sculptural masses, with vertical slots linking visually to the podium: an early hint of late Corbusier in the city.'
Brutiful Birmingham has applied to list it. Please show your support for this and help campaign to save it.
Photo by Frankie Finlay.

Posted by CatherineJJ at 02:17 No comments:

go to Birmingham University for some fabulous architecture!

Find out what Mary Keating has to say in the Birmingham Post! 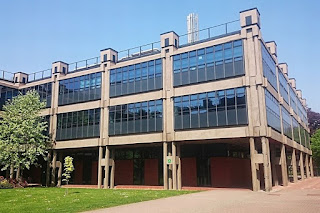 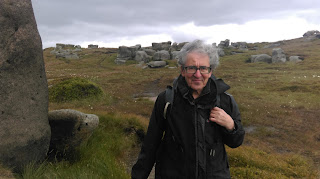 We are very grateful to Joe Holyoak, architect and urban designer, for allowing us to publish the obituary he wrote for Alan, that was published last week in the Birmingham Post.

Alan Clawley, who has died from cancer at the age of 74, was an environmental and social activist and campaigner who spent the last 43 years of his life dedicated to various causes in Birmingham. Alan was an architect, educated at the Architectural Association in London, although he did not pursue conventional architectural practice after 1973. He graduated from the AA in 1969, and the route that his professional allegiances and activities took is typical of his generation.

1969 was the high point of orthodox modernism in architecture and planning – the idea that we could build the world anew, rejecting the past and starting boldly from scratch. But it was also the point at which the consensus on modernism began to crack apart, and from which alternative philosophies were developed, leading to very different and more diverse forms of practice in the 1970s. The path that Alan chose reflected this shift in culture.

After graduation, an enthusiastic modernist, Alan worked first for Runcorn New Town Corporation, on a housing scheme of 2,000 concrete dwellings, and then for the Greater London Council, on expanded towns in the southeast and east Anglia. He became disillusioned by the realisation that he was designing new dwellings for thousands of people whom he never met, and about whom he knew nothing. This mechanistic mass production of buildings, in which the occupants played no part, was replaced for Alan by the practices of community architecture and planning, in which the inhabitants are engaged in the process, playing a central and active role.

In Alan’s own words, the terms which defined his life from 1973 onwards were “community, public participation, localness and smallness of scale”; all characteristics absent both from his architectural education and from his employment in Runcorn and London.

One of the forms of practice which replaced large-scale modernist production in the early 70s was the government’s Inner Area Studies, which included a focus on local character, and promoted the improvement of older housing instead of its wholesale clearance and replacement. One of the pioneering studies was based in Small Heath; in 1975 Alan came to Birmingham, joined the team running the study, from the architecture and planning firm Llewellyn-Davies Weeks Forestier-Walker, and continued to live in Small Heath until his death.

The house in which Alan lived with his wife Hazel, whom he married in 1972, was itself illustrative of his social and economic beliefs. The Clawleys joined the Small Heath Park Housing Co-operative, which built a cluster of houses for its members, completed in 1984. They were Green Party members from the same time, regularly standing as candidates in local wards at council elections, including last week’s election, where Alan stood in Bordesley Green.


The community technical aid movement, which flourished during the 70s and 80s, made the professional services of people like architects accessible to sectors of society previously distant from them. In Birmingham the Inner City Partnership Programme funded Community Networks and the Digbeth Trust, for whom Alan acted as community technical aid worker between 1984 and 1992, enabling many community groups to obtain design and development advice.

Alan was born in Liverpool. His parents were Salvation Army officers, and Alan moved several times with them as they were allocated new posts around the country. It is likely that Alan gained much of his social conscience and his inherent asceticism from his upbringing by them. Alan was a quiet and modest man, but fiercely principled, and willing to fight for a cause he believed in.

In recent years he became best-known for his passionate championing, as the secretary of the Friends of the Central Library, which he co-founded, of John Madin’s 1974 building. It is perhaps surprising, on the face of it, that someone dedicated to post-modern modes of community advocacy, and small-scale and local grassroots development, should be so passionate about a monumental piece of modern concrete Brutalism.

But it was in fact all of a piece. Alan admired the Central Library’s rigour, austerity and honesty, as well as its ethical virtues of architecture in public service. As a Green Party activist, he was also opposed to the wasteful destruction of a building which could be reused. Alan was a keen mountain walker, seeking out elevated rocky landscapes, and also greatly attracted by Norman cathedrals. It is perhaps not fanciful to see Alan responding to tough characteristics in Madin’s library that were similar to what he found in those places.

Alan was not afraid to challenge power and authority, and systematically countered the various dubious arguments put forward by the council and developers for the library’s demolition. Through his advocacy he became a great admirer of John Madin, and wrote his biography, published in 2011. He later wrote “Library Story”, the history of the Central Library and its eventual fate (2016). In between he wrote “Batsfords Birmingham Then and Now” (2013).

At his death he had completed the draft of a book on the history of planning and architecture in Birmingham from the 19th century onwards, and I hope to see this edited and published.

Alan leaves his wife Hazel, their children Jonathan and Alison, and two grandchildren.

A tribute to Alan Clawley from his tenor friends

Posted by CatherineJJ at 09:12 No comments:

Very sad news about the person who really made Brutiful Birmingham happen. We owe so much to him.

We will write more in due course but felt we needed to share what is in the public domain. We all at Brutiful deeply mourn Alan's loss and remember him with great fondness and respect. Right now we're just very sad.
Posted by CatherineJJ at 00:54 No comments:

On 8th February the Brutiful Action group met for the day at the rather attractive leafy hidden building that is Edgbaston Friends Meeting House. There we demolished delicious bread and cheese, fruit, cake and copious tea and coffee while working out how this passionate group should proceed into the future and how we can protect and speak up for post WWII architecture in Birmingham.

Over the coming months we hope to bring you lots more news about what the group is up to, and how you can get involved. In the meantime, have a giggle at some photos.... most interestingly we each had to bring a photo of our favourite post modernist building- which meant for us everything from a Le Coubusier building to the National Theatre, Churchill College to Wolverhampton School of Art. 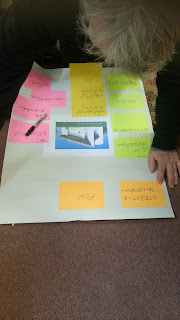 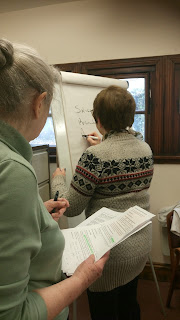 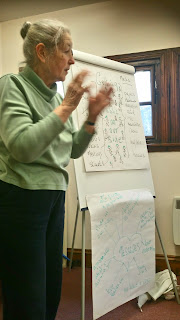 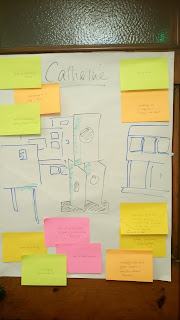 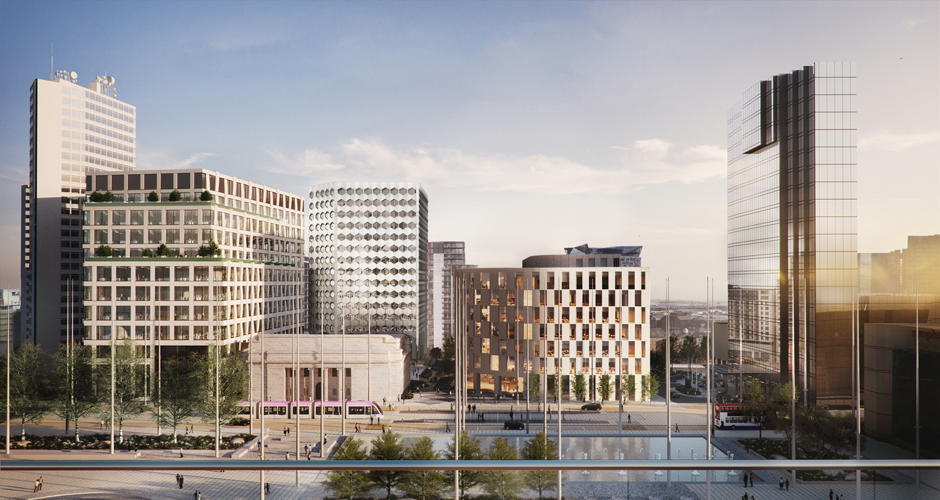 the dwarfing of Alpha Tower

bruty is in the eye of the beholder 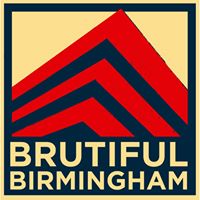 The end of an era

House of Fraser seems to have found itself in many rather interesting buildings throughout the country. Take Beatties in Wolverhampto...